Going over my many pictures of Safari Lodge interiors that I took during our last Christmas vacation inspired me to share them with you and, of course, adding my own two cents while I’m at it. Personally, I love the safari lodge style quite a lot, as it is easy going, practical, natural, versatile, and above all extremely cosy and welcoming. It connects both interiors and exteriors like no other style does. The style derives its color scheme from the (usually: African) landscape,  makes creative and mostly untreated use of native materials, opens up the space to the exteriors through large windows or by simply forgetting about windows altogether, and may even go as far as to relegate particular room elements (such as a shower) to the outside. In short, the style unites a broad range of attributes that are outright intriguing and may inspire you in your next decoration/renovation project!

If you associate safari lodge style merely with relatively basic interiors featuring thatched roofs, heavy wood furniture, mosquito nets, the obligatory African mask, buffalo horns and linen soft furnishings, you may be in for a surprise! Of course, those interiors exist (and, don’t get me wrong, as simple as they may be, they can be really nice), but they do not represent the entire spectrum of the safari lodge style out there. On the contrary! As you will see in the pictures below,  it is not uncommon to glam up the style quite a bit, making it look luxurious and fancy while retaining a sense of native simplicity and a wonderfully rustic feel. In fact, upon entering an upscale safari lodge, you may be faced with glamorous fabrics, intricate carvings, fancy bathroom fixtures, even (on one surprising occasion) off-kilter crystal chandeliers. While all this may sound outright odd and “of bad taste”, (you’ll have to trust me on this), it is not: astonishingly, the style is versatile and forgiving enough to embrace “alien” elements to stunning effect.

A quick note before we proceed: As I have added quite a lot of pictures and fear that you may get lost in the post, I have organised the description of the various decorative elements into the following categories and added links for easy access to the individual paragraphs (and pictures 🙂 ).

Exposed ceilings showing the beauty of the thatched roofs add a great deal of character to a room. Most ceiling patterns and the associated beam structures are so beautiful that they don’t require any additional decoration. The ones in the pictures below are made from banana leaves (Tree Lodge, Lake Manyara).

While we always found rugs and mats in meticulous condition, the floors themselves had a bit more of a shabby chic appeal. The wood often seems to be reclaimed or at best rudimentarily cut into shape. It almost always features irregular planks with knots, small cracks and scratches.

Concrete, stone, and tile flooring radiated similar vibes. They always looked like as if they had been there for a long time (even if not…). Tiles (when used in conjunction with other flooring such as concrete) help demarcate a smaller area in a big space. 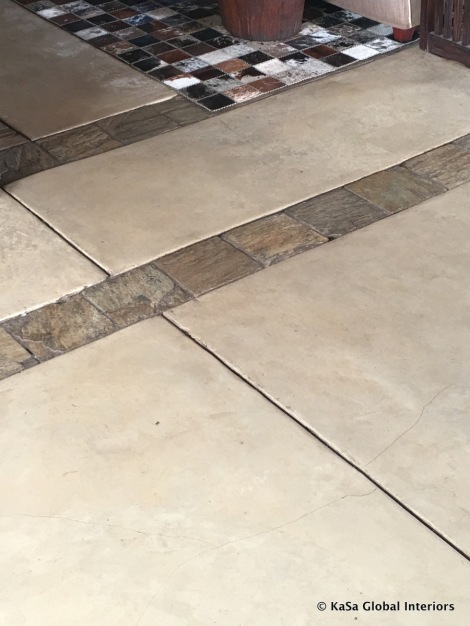 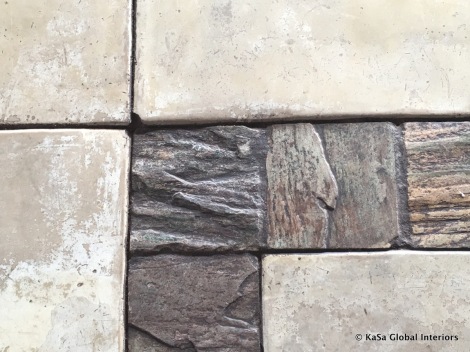 Well. These certainly take some getting used to. But if you have a (private! This is very important) space outdoors (and live in a climate where it’s warm all year round), you may want to seriously consider adding one. That said, I must admit that taking a shower at night requires a bit of courage, given the many small, light-attracted flying creatures hopping and popping around after nightfall. (Add to that the idea that you may be watched by a leopard or lion from the nearby thicket  you may quickly rethink your evening shower routine and limit taking showers to an earlier time slot. Dawn is stunning.) In any case, the lodges are always careful to provide indoor bathtubs. 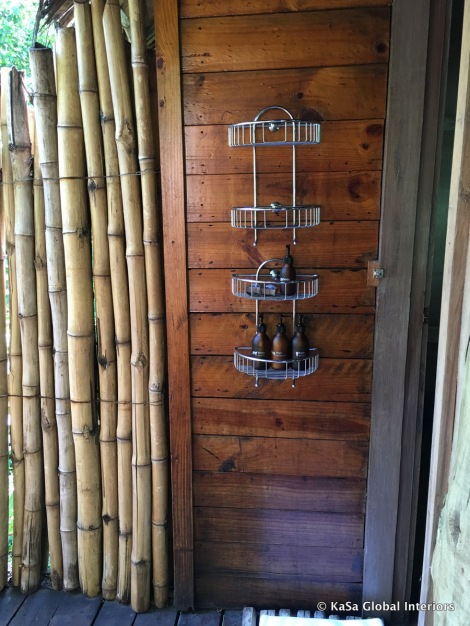 Safari lodges are equipped with (… mostly) comfy furniture. This even holds true when you stay at a tented camp. There is always a large sofa to sink into, and I have yet to find a bed that was uncomfortable.

Rest assured, you won’t find an Eames chair there, or indeed anything made from chromed tubular steel. Instead, most furniture is made from dark solid wood, appears locally (hand?) made and looks (and probably is!) very sturdy.

Individual pieces tend to be fairly large and due to their being made from solid wood, also pretty heavy. As a result they cannot easily be moved around.

The African lodges we have visited were all well lit, but always with dimmed light. This kind of lighting reinforces the accomodating atmosphere of the space. The style of the lighting fixtures themselves ranged from simple to stunning and from flimsy to rustic.

Metal wall sconce with beaded shade. The wall sconces were left hanging somewhat crooked … all of them. Probably on purpose to avoid a “too polished”-look!

Light fixtures are wall mounted, hung from the ceiling, but also come in the form of hidden up/down lights, floor and table lamps. They are made from leather, woven fabric (made from grass or leaves), 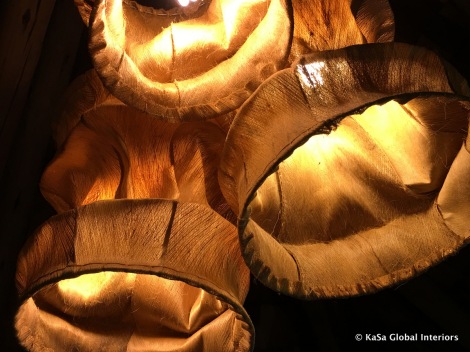 put together with wire and beads (see above), created from cut and bent metal, feature paper or fabric screens attached to wooden or bamboo bases, or, sometimes, drip with crystals. 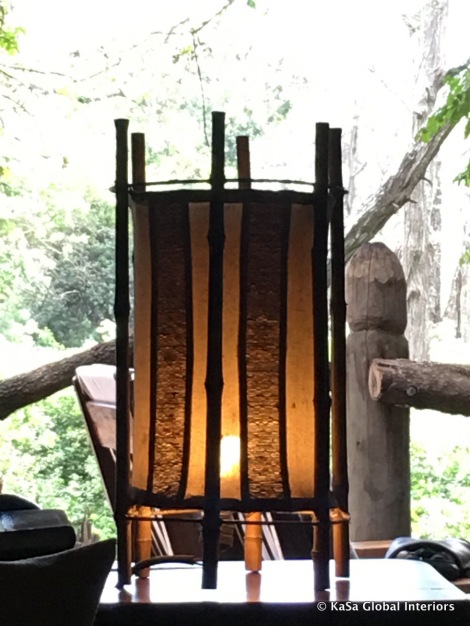 Apart from the electrical lighting, safari lodges make ubiquitous use of alternative lighting as well. Why? In terms of creating a cosy atmosphere, probably nothing beats candlelight or the flickering light of a oil lantern.

Lanterns are very versatile, especially when it comes to lighting up exterior spaces in the middle of the bush or inside the boma. A boma is a kind of interior courtyard, where traditionally, domestic animals were kept over night. At the lodges they are often used to host outdoor dinners (here the lantern lighting comes in handy!)

To make the best out of available daylight – even without the luxury of large windows, an impressive skylight (r0und hole in the roof) can do the trick as shown in the picture below. Here the ceiling is decorated such that it frames the skylight, which forms the focal point of that beautiful space.

Window treatments can be as simple as a heavy linen roller shade in a neutral color. The ones in the picture to the left were a bit complicated to roll up again (since they were incredibly heavy, and there was no rope to pull on), but very effective in the evenings, when keeping curious animal eyes out and making ourselves feel less exposed to the exteriors was more of a priority. Heavy curtains—perhaps made from a similar fabric—are always a safe choice when it comes to lodge-style design, as they don’t detract from the otherwise oftentimes carefully decorated interiors. Of course, as indicated in the introductory paragraphs to this post, you can always glam it up: 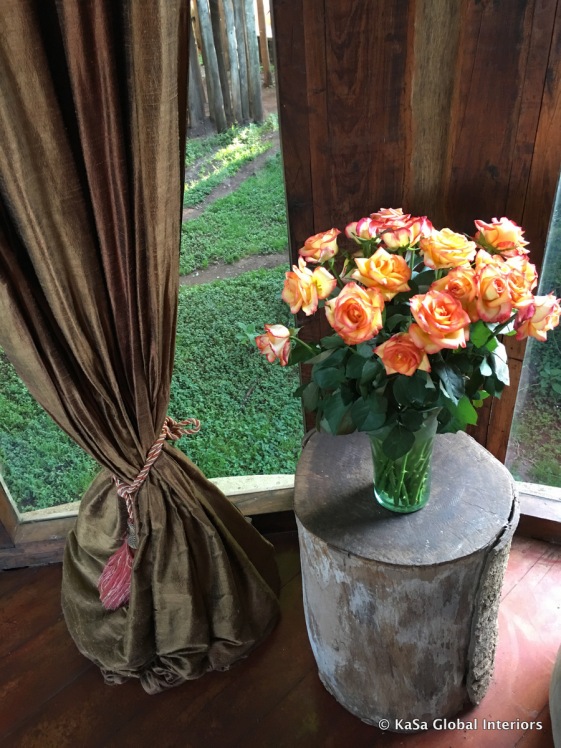 Add to that a bouquet of fresh roses (they are delivered once a week from relatively nearby Arusha. Nearby, here meaning a two hours drive up into the Crater and you can easily forget for a moment that you are in the middle of Africa …

Following the same eccentric style, soft furnishings are used to great effect in the guest bedrooms as well. The silky headboard is totally over the top – yet incredibly cool. The throw pillows pick up the main colors of the room while the burgundy mohair blanket adds a rich dark-red accent which is repeated in the curtains (not shown). The bed linens themselves are made from scrupulously white cotton. (Also note the carvings … they are everywhere and add a very unique personality to that wonderful lodge.)

Below is another example of how fabrics can be used in unexpected ways to add some wow-effect to a room, and make it inviting at the same time. (The bland wooden walls consisting of stained plywood would not have done the trick, believe me!)

During the day, the mosquito net (made from fine, light and semi-transparent cotton) is elegantly draped up to the ceiling beam. It looks stunning and almost seems to invite one to take a well-deserved afternoon nap. At night, the net is let down and does an excellent job at keeping the two-inch wingspan moths at bay, to say nothing of mosquitos. Again, the bed linen is made from fine white cotton while the matelasse-style blanket adds visual interest with texture.

When designing a safari lodge, cowhides and zebra skins are the usual choice when it comes to rugs. They don’t need to come in the iconic single piece though, but may be intricately stitched together like the one in the picture below. Woven mats (from sisal, jute and similar) are also quite ubiquitous. They look great and are very soft underfoot. 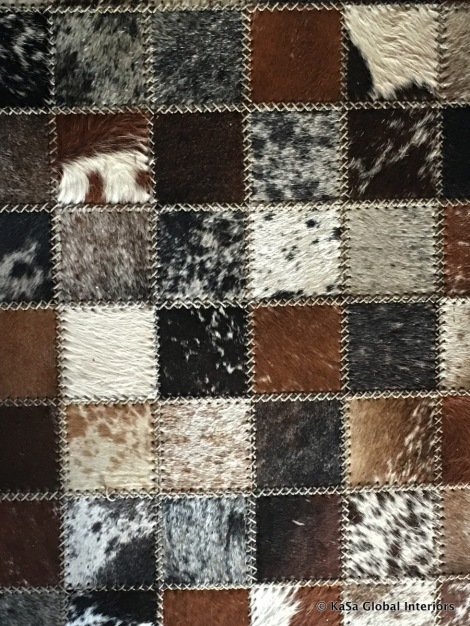 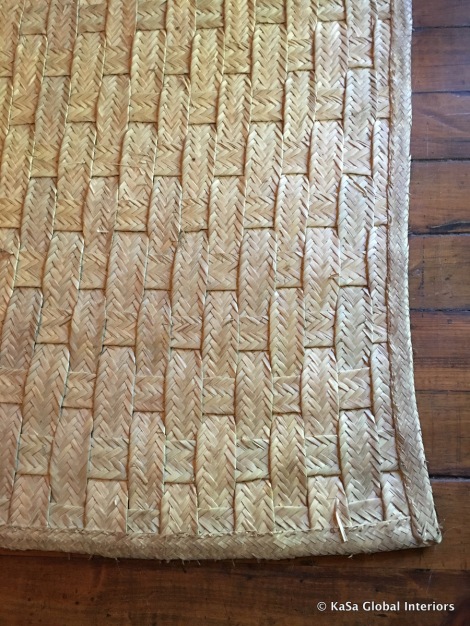 Here, African masks may come to mind. But they are certainly not the only things that you may find on the wall of a safari lodge. From what we have seen, nearly everything that has some decorative appeal may be used as such – regardless of its originally intended use. Indeed, a few years ago we (not pictured) even found a set of bejeweled antelope skulls hanging off the wall above our beds. Somewhat… eccentric? 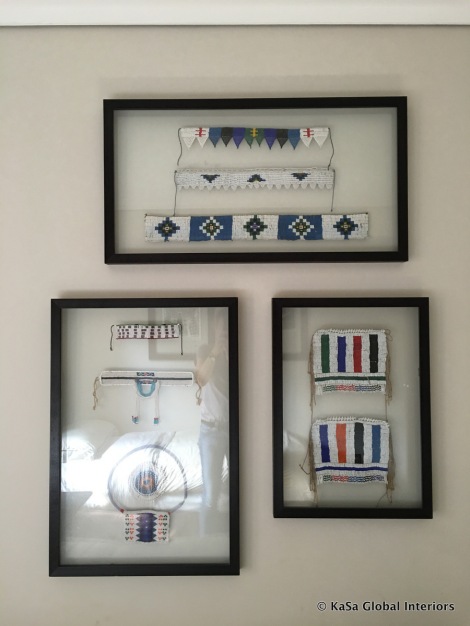 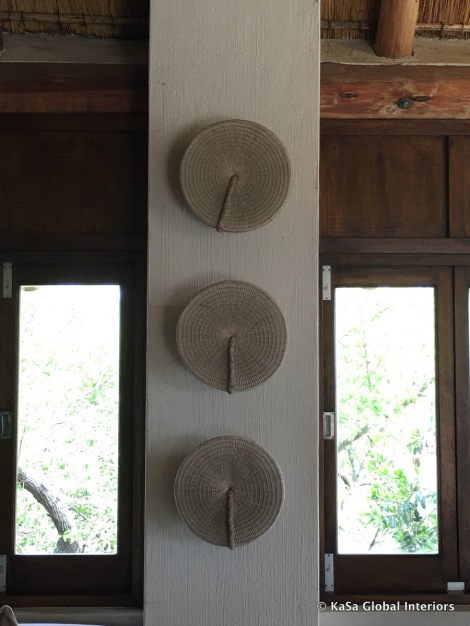 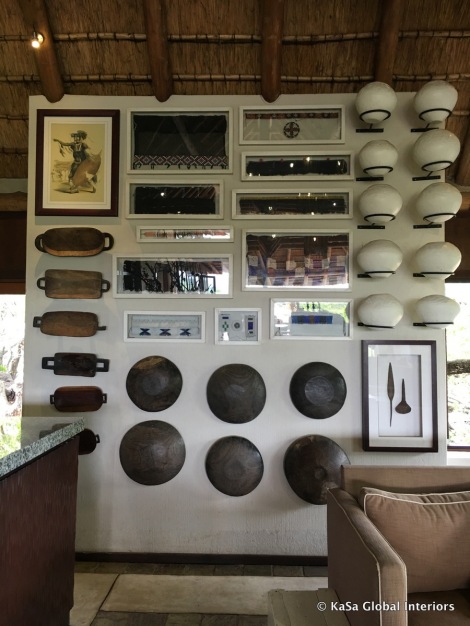 Thus, you will find framed ethnic art (woven, beaded), impressive wood carvings, abstract art pictures, wooden bowls and trays, or even spoons hanging on the walls. All these artefacts are either directly pinned to the wall or framed. As is the case with much art, they may be displayed single, in groups of two or three or as a larger mixed display. The strictly neutral color scheme unites them and lets them blend into the room, while the apparent randomness of what’s put up adds playfulness to the space and a sense of collectedness.

As with wall art, the sky is the limit when it comes to how art objects (but also those that are distinctly “non art”) are appropriated to serve as room decoration. Below a few examples …

African masks? Sure. We have seen lots of them. Some were scary, others were outright gorgeous. Not all of them hung on walls though. Many are used instead as sculptures.

Board games are common in safari lodges. After all – while waiting for a game drive or sitting together in the evening, it is always fun to play a round of Bao, chess, Jenga,  … Contrary to the kind of colourful game board boxes we are used to, these board games come in solid wood and leather and look fabulous as decorative pieces in their own right. The choice of materials makes sure they are good for a long time. In contrast, I cannot imagine a typical cardboard game box would look so attractive for so long (assuming here that it ever did…) 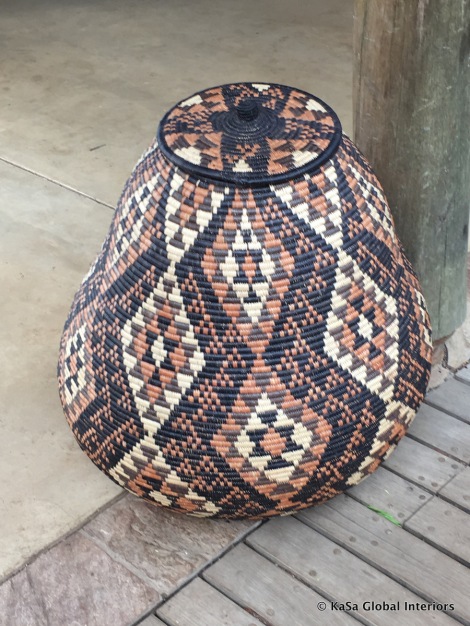 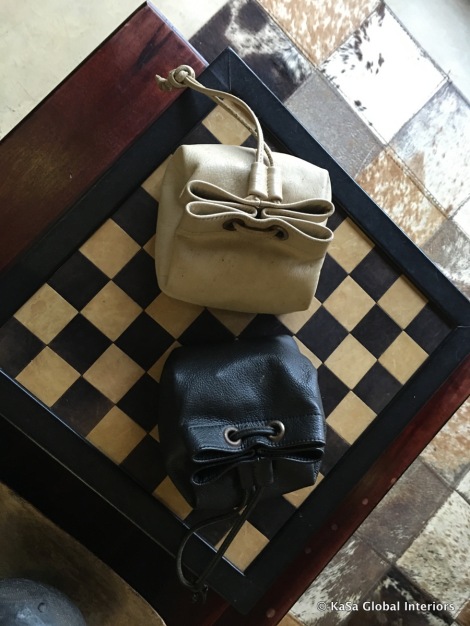 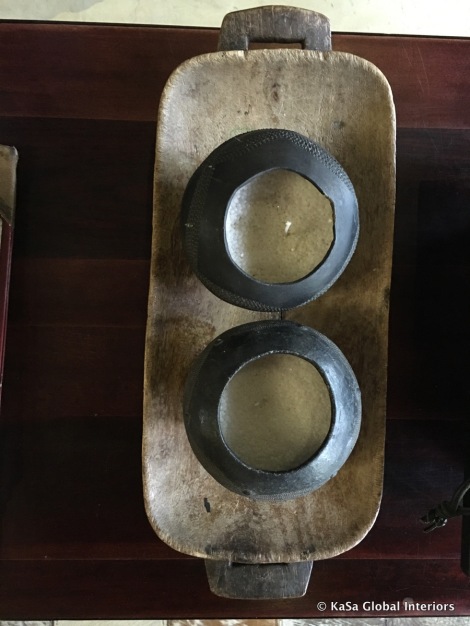 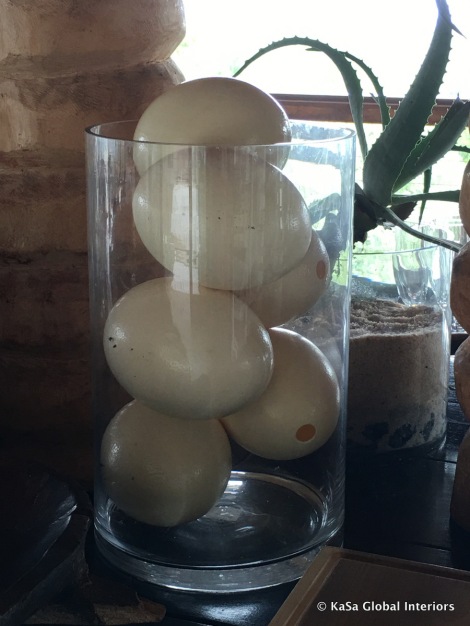 2 responses to “Safari Lodge Style in a Nutshell”