The mid-century modern style evolved over a 30-year “stretch from 1945 to 1975 — a period of extraordinary economic growth, which produced an appetite for progressive design in everything from clothing to automobiles. At the time modern home design was referred to as contemporary. The term “midcentury modern” came into common use in the late 1990s.” (Randel, 2015) Having suffered through the austerity of the war years, people were finally again ready to embrace a certain level of optimism and joy (Dietrich, 2013). It is precisely this sentiment that is reflected in mid-century styled homes. You only need to take a look at the vivid use of colors (see Fig.1), the expressive patterns, and many new sensual shapes of now classic furniture designs (Lutyens, p. 16.). The mid-century look bridges the gap between the organic and the man-made, integrating the use of innovative technology of new materials with the pleasing forms of nature (Frederick, 2012). Similar to early 20th century designers (e.g. those related to the Bauhaus), mid-century designers believed that good design should both be available to everybody and touch all aspects of the interior (architecture, lighting, furniture, flooring).  In trying to forge a connection between the functional and the fluid forms of nature, new technologies and materials (e.g. Lucite) were embraced that permitted the creation of futuristic and pleasing organic forms while ensuring that they could be mass-produced and be of good quality. Thus, at the core, the mid-century modern style embodies balance and harmony (Quinn, 2006, p. 19) between the artificial and the natural, effectively integrating new and old, functional and playful, as well as lively and elegant.

Similar to the Japanese style, mid-century modern stands for interiors that are free of clutter, where each design element has its dedicated function and packs considerable visual punch (Ott, 2015) . Comfort is essential, while ornamentation is largely avoided. Another parallel between the two styles is the attempt to forge a connection with nature. Not surprisingly, many mid-century designs look perfectly at home in a Japanese space. Conversely some of the most popular designers of the period were of Japanese descent: Noguchi, Nakashima, Yanagi.

IN FURNITURE, GO FOR RESTRAINT, FUNCTIONALITY AND SCULPTURAL AESTHETIC

In line with the maxim to focus on the essential, mid-century design limits furnishings to a few key pieces. The furniture itself often has a sculptural aesthetic, but generally features simple lines and is highly functional. Materials and manufacturing processes that took root in the middle of the 20th century enabled designers and architects such as George Nelson, George Nakashima, Verner Panton, Gio Ponti, Harry Bertoia, Eero Saarinen, Arne Jacobsen, Florence Knoll, Norman Cherner, and Charles and Ray Eames (among others) to come up with innovative, and oftentimes futuristic forms (see e.g. George Nelson’s marshmallow sofa, or Verner Panton’s plastic dining chairs). It is those striking forms (and the accompanying equally striking colors) that turn those pieces easily into focal points. Back then plastic, Plexiglass, steel, molded plywood, glass, vinyl and Lucite made large inroads into furniture design (Abbas, 2016), yet nicely complemented other furniture made from traditional materials such as wood. Lightweight chairs (see e.g. Eames’ DSW chair or Arne Jacobson’s Ant) were (and still are) all the rage. In-built furniture, e.g. breakfast nooks, could be found everywhere – as they saved space and proved practical. Further multi-purpose storage also became a major trend (e.g. Alvar Aalto’s tea trolley).

Mid-century design does not limit striking designs to furniture, however. The importance of wall treatments is hard to overlook.   Mid-century wallpaper, for example possesses either nature (e.g. plant) motifs or shows bold geometric patterns – often in vivid colors. At the same time, glass and wood panels are another mainstay of mid-century modern design (see Fig. 2).

Window treatments are held simple if considered necessary at all. Natural daylight is invited in, and views are kept unobstructed if possible. 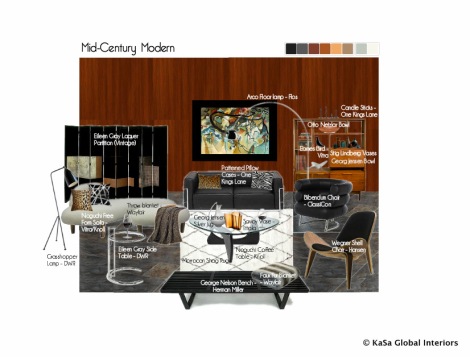 INTEGRATE NATURE AND TECHNOLOGY TO ACHIEVE BALANCE AND HARMONY

Typical mid-century flooring materials also reflect both the desire to bring nature into the interiors and the 50’s enthusiasm to experiment with new and futuristic materials. Thus, flooring can be made from wood, cork, stone or clay tiles, but also from linoleum, vinyl or laminates. If floors are covered with rugs, those rugs often show bold geometrical, abstract patterns. Alternatively, rugs from faux fur also get the green light.

In line with the style, mid-century soft furnishings also border at times on the adventurous. Animal prints, bowl and vase motifs (e.g. by Mahler), graphic, highly stylized and abstract patterns, whimsical and folk art motives, etc.  – in bold, primary and earthy colors – are typical for the era. Those motifs reflect the mid-century movements in painting, sculpture and architecture. Interestingly, postwar textile manufacturers tended to be bolder with pattern than their wallpaper contemporaries. Probably because textiles, unlike wallpapers that filled a room, usually served as eye-catching accents for smaller areas like curtains, so could be more daring without being overpowering (Lutyens, 2006). In terms of materials, natural fabrics are the fabrics of choice. Heavy, textural fabrics such as burlap or nubbly wool knits give patterns even weight (Frederick, 2012).

ADD ACCESSORIES – BUT LESS IS MORE

While mid-century modern is about clutter free environments, accessories from that era seem to be ubiquitous, have lots of presence and come in many forms and sizes.

While pictures and paintings reflect the popularity of Pop Art by Andy Warhol, Roy Liechtenstein and others, abstract art was also fairly common. Other typical wall décor are sunburst clocks, “flying ducks”, décor items like Eames’ ‘hang it all’, or George Nelson’s ball clocks.

Ceramics by Wilhelm Kage, Stig Lindberg, Gunnar Nylund, Eva Zeisel and others show organic and sculptural forms, but can also have a distinctly understated feel and are highly functional  (e.g. see Gunnar Nylund’s work). Mid-century faience stoneware often had polychrome decoration over a white glaze, see e.g. the Gaeity vases by Hornesa Pottery. (Quinn, p. 113). In terms of glass works, both the Scandinavians and Italian were in the lead. Good examples of the style  are Tapio Wirkkala’s Kantarelli vase or the glass works by Paolo Venini who with his design of unpredictable, asymmetrical forms was in the vanguard of the renaissance of Murano glass in the 1950s.  Breakfast trays, toast racks, champagne coolers, cocktail shakers were often made from metal, and finished in various ways: matt, glossy, textured, or colourful enamels (Quinn 2006).

Lastly, what about the lighting? Mid-century light fixtures increase a room’s drama considerably. Whether pendants, table or floor lamps – mid-century lighting fixtures tend to have a lot of presence. Bubble lights, sputnik chandeliers, the Arco floor lamp, Poul Henningson’s multilayered artichoke light, or Noguchi’s Akari lights to name but a few, are all statement lights that add instantaneous mid-century vibes to any space. As they all have strong ‘personalities’ of their own though, they need to be given space. In other words, as with ornamentation in general, mid-century design calls for careful selection and the exercise of restraint. Statement lights should not have to compete for attention with each other.

NOW PUT IT ALL TOGETHER

This might sound rather daunting given that the options are endless. But if you go about it step by step, it should not be a problem. Start with one piece of iconic furniture and then build around it. Avoid too many patterns and stay within a color range, in particular for wood (Abbas, 2016). Good luck.