The Venturi and Scott Brown couple, two architects united by their dissatisfaction with modernism and their search for something new, may be rightly heralded as the founders of postmodernism. Their claim that architecture, which at the time was stubbornly bland and featureless, should have symbolic as well as functional value, shattered existing convention. With this paradigm shift, the Venturis paved the way for successful postmodern architects such as Frank Gehry, Zaha Hadid, and Michael Graves.

Less is a Bore!

Modernist skylines at the beginning of the 20th Century were dominated by boxes. Buildings, resplendent in their use of modern materials such as steel and concrete, were unadorned and standardised, featureless towers that reflected neither their purpose nor their potential for beauty. Through repetition and standardisation, modernism strove to fulfill the ideals of an imagined, purist utopia. The purpose of a building, the movement declared, was distinct from its structure, so form followed function in every respect. Boxes grew out of the ground. All the while, the Venturis sowed quiet dissent. Their book, “Complexity and Contradiction in Architecture” calls for the resurrection of classical elements, ornamental and complex. Based off the concept that architecture can be defined as well metaphorically, in the form of signs and symbols, as literally, by walls, the postmodernist philosophy they developed called for a renewed appreciation of intricacy. Moreover, it encouraged flexibility. The meaning of symbols can change, even from person to person, allowing the architecture which makes use of it to adapt to the society around it.

The Venturis’ journey began in Venice, and the solid walls that demarcate its piazzas. Contrasting the structure of the city with that of American metropolies like Las Vegas, they recognised that architecture can be defined in two ways: literally, through walls, and metaphorically, through the use of signs. In Las Vegas, there are no high walls to separate one building from another. Rather, each casino’s territory is staked out by neon signs. While there is no true wall, the psychological barriers they create are just as effective at creating space. The use of symbolism is nothing new, either. On returning to Venice, the Venturis found that classical architecture in particular uses powerful symbolism, found in the ornamentation, to relay spatial as well as cultural messages. It is the combination of symbolism and structure that makes the piazzas so striking. The Venturis had discovered the missing ingredient from the modernist landscape that surrounded them. 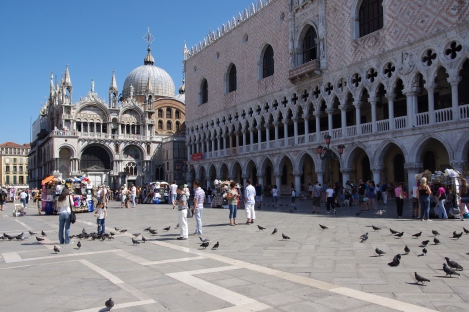 The application of their ideas is outlined by the “gentle manifesto”, which, above all, encourages the use of historical or classical elements to inform contemporary design. That means columns, decoration, ornamentation, and facades. Many such influences are present in their work. I will briefly illustrate this using two examples,

The Chapel at the Episcopal Academy is a somewhat eclectic building, especially given the time it was built. The symmetrical silhouette immediately calls to mind Greek architecture. A  triangular roof balances atop rows of elegant columns, grandly welcoming the congregation. The staggered, stepped form, starkly contrasting conservative, modernist boxes, further enhances the associations with sacredness by drawing the eye towards the elevated heart of the building, and to the sky. The interior features a central atrium, the pews radiating outwards in a fan shape. This is somewhat unorthodox, as pews are typically arranged in a rectangular format, but effective. Finding precedence in Roman amphitheatres, the fan seating allows people on all sides to see and hear the pastor clearly, inviting more people in and promoting a sense of the democracy of religion. Circles also symbolise unity and a sacred closure. The beams of the roof are set in a tree-like arrangement, furthering the message of connection and life associated with Christianity. One of the most interesting things about this building is that the Venturis did not simply try to replicate the Parthenon. While borrowing the most effective symbolic elements from it, modernism and contemporary style are still evident in the rectangular shapes of the columns, and the conservative square forms of the glass window frames. Postmodernism, as the Venturis saw it, was all about referencing tradition to explore the contemporary use of modern materials, in a manner that communicates emotional significance to the audience.

The Vancouver Seattle Modern Art Museum is a somewhat more restrained building, but is equally striking. The mural out front, the large silhouette of a man, recreates the effect of Vegas’ street signs, and proclaims the purpose of the building. As though it wasn’t clear enough, the south wall also features a large engraving of the name of the building, as does the entranceway. Again, the architecture features modern reinterpretations of classical forms. The corridors, bedecked by ornamental arches, may remind the viewer of the arches in Indian temples, with one twist — the Venturis’ arches are painted in striking reds, oranges, and yellows. The combination of symbols, the sacredness of elaborate decoration and the playfulness of colour, perfectly embody the contemporary spirit of the museum. Colour has further significance in the exterior. By highlighting the entrances with brick red paint, the Venturis remind the audience of Seattle’s traditional use of terra-cotta. Limestone, which constitutes the south façade, also testifies to the city’s historical context. The combination of these soft colours and the use of natural finishes, contrasts the deliberately bland, unchanging face of modernist architecture, and makes the building warm and inviting. Another quick example of the Venturi’s use of symbolic paint is the Reedy Creek Emergency Services Headquarters and Fire Station. Its walls, covered with the spots of a Dalmatian, instantly communicate the purpose of the building, the Dalmation being the mascot of the fire department. Colour may not have been used in classical architecture, as far as we know, but by making effective use of it as an aspect of ornamentation, the Venturis made their buildings more communicative, emotional, and therefore appealing.

The Venturis were the driving force behind the initial postmodernist movement. While today appearing less ambitious than the architects who grew up in the postmodern culture, at the time their work was seminal and revolutionary. The return of symbolism to architecture ushered in a reform in design that architects have just begun to explore the full implications of. 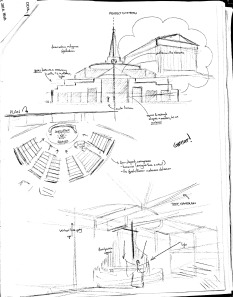 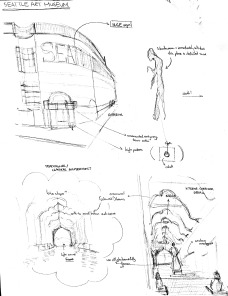