When we recently designed our master bathroom, we faced, as my daughter Natasha would say, a “little problem”: we had to put a partition wall between the free standing vanity platform and the fantastic view through the windows on the far side. Hmph.

The partition was necessary to give some stability to the vanity platform, and to separate the tub area from the rest of the bathroom. To ensure we could still enjoy the view – while “brushing our teeth” as my husband put it – the partition was to consist of vertical slats, to construct a “fence divider” of sorts. Figuring that that would be a decent solution, we left it at that until the time came to turn plan into reality.

Vanity platform with tub in the background. The view is through the large windows to the left of the picture

Looking at a picture similar to the one above, my husband one day noted that the slatted fence divider was not a great design solution after all. Why not? His reasoning was rather straight-forward: with the vertical slats about 12 cm deep, 1 cm thick, and spaced 10 cm apart, the partition would block the view if you stand in front of the platform facing the slats at a less than a 90 degree angle.

As a result my husband started bugging me to come up with something else (please!). At the same time, I had begun to have my own doubts albeit for an entirely different reason: How would we fix the mirrors? Suspend them from the pitched ceiling? Not going to happen. Given their weight, Craig, our contractor, warned us that such a solution could cause “minor technical challenges.”

For lack of a better idea, I did not tackle the problem immediately. The Christmas holidays were around the corner, so I lazily put the fence divider issue on my personal back burner. After all, we had an ok, though certainly not perfect, solution. So why bother (now)? Almost needless to say, we enjoyed our vacation without wasting another thought on bathroom partitions or suspended mirrors.

But then, on the last day of our vacation, the bathroom issue unexpectedly reclaimed centre stage. We were about to check in for a night at the Hyatt Regency in Johannesburg. When I walked into the lobby, I had to blink a few times, in disbelief. The solution to the partition issue was staring me in the face.  It presented itself in the form of an impressive piece of art, made from a combination of steel and artfully stained glass that separated the lobby area from the breakfast restaurant behind it (design by Nick Human of LLPDesign). From the lobby I could clearly see the windows of the restaurant at the far end of the space. The structure featured a couple of unevenly, but fairly widely spaced vertical slats that were connected – apparently in random fashion – by pieces of beautifully stained glass. Most of the space between the slats was  left entirely open, which permitted newly arrived guests to peek right through it, across the restaurant space, and out the windows at the opposite end to catch a glimpse of the magnificent park behind the hotel. 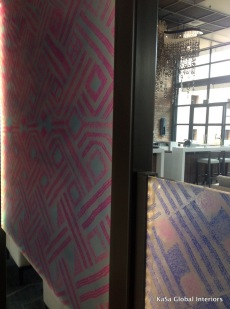 I was hooked. What about if we build something similar in our bathroom? Instead of the metal frame, we would use wood as originally planned. And instead of the stained glass we would use mirrors. This way, the mirror suspension problem would be resolved at the same time …

I could hardly wait to get home to call Craig to discuss all of this, keeping my fingers crossed that he had not yet started with the construction of the partition.

I was lucky. He had been about to do so the following week, but so far had not spent any time on it.  I sent him a quick email for illustration purposes and then waited for his “verdict”. 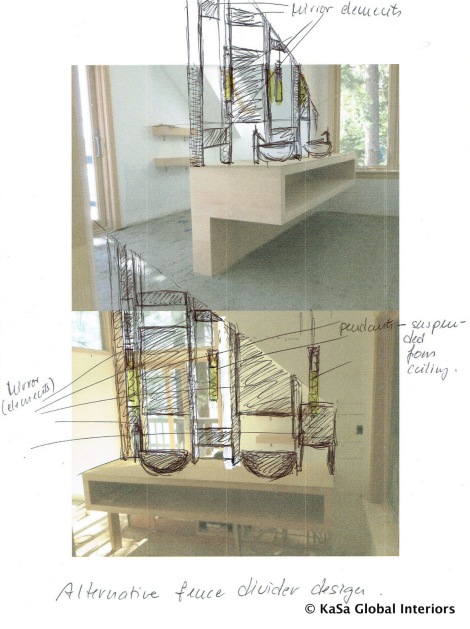 Quick photo-layover to show Craig what I had in mind 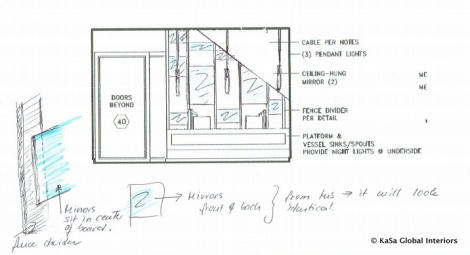 Mark-up of elevation: to give a more precise idea of where I wanted the individual mirrors to be. Craig actually worked off this sketch. I did not provide any additional instructions.

He called back a day later and said that this was not only a much nicer (as in “better view and cooler looks”), but also a more stable solution than what we had had before. I guess it did not harm that the mirror issue was resolved along the way…  Being the perfectionist he is, however, he suggested fully framing the mirrors on all four sides. As they were double-sided that made sense, and so we went ahead.

About a week later, I received pictures of the cardboard mock-ups, which were quickly approved. 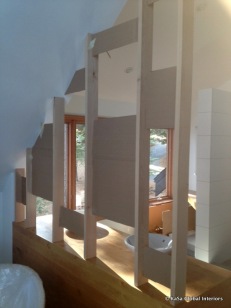 Presently, the cardboard was replaced with carefully framed mirrors and the three vanity pendants hung. The result blew us all away (hubby and Craig included), as the final end product looks considerably better than what we had envisioned.  Instead of having a barrage of slats blocking large parts of the view, the perplexing effect of the mirrors makes the divider virtually disappear. Together with the lighting, the outcome is almost magical!

View from the tub area

According to my husband, it ended up lending itself rather well to brushing one’s teeth!

4 responses to “Lobby Artwork Goes to the Bathroom”