Last week, I was in the throes of decorating my flat for Chinese New Year (CNY), mostly because I was hosting a gathering, so that became my excuse to get the house ready, early for the holiday.  My first stop in Hong Kong is the market in Wanchai, specifically Spring Lane which itself boasts two specialty shops for CNY decorations.

By the way, after I gave her a red paper cutting of auspicious fish and the Chinese character for fortune, 福 (fù), which I bought in the aforementioned shop, my fellow blogger Sabine Hirt suggested that I write about CNY decorating.  Now you may not believe me but my first response was “No!”  After all, I had written Upcycling for Your Holiday Decor and I did not want to be typecast as the holiday decor blogger.

However, it is Chinese New Year and Sabine isn’t Chinese so the job falls to me.  I promise that this will not be an exhaustive list but rather a few key pointers on how to wade through the overwhelmingly red and gold festive offering in order to strike an appropriate yet always elegant holiday note.   We don’t want a gaudy, marketplace look which works for the shopping malls but not our home!

Papers cuttings (already mentioned) -Think paper snowflake cuttings but instead of snowflakes, the cutouts are of the Chinese zodiac animals, lucky characters and flowers like peonies which signify new beginnings and growth.

A Spring Kaleidescope for CNY

This year, I not only got them in the ubiquitous red paper but also in kaleidoscope!  Red is de-rigeur for CNY but polychromatic is also fitting as this holiday  is the Spring Festival, 春節 (chūnjié), in the Chinese language.  Multi-colored paper cuttings are more difficult to find but they are definitely worth it and pssst…Spring Lane has them.  Don’t go too big and add touches of red paper cuttings for impact alongside multi-colored ones for a tempered effect.  Channeling spring colors complement current contemporary decors better too.

Flowers – What says Spring more than fresh flowers?  Avoid the grotesque Apple of Sodom, Solanum mammosum, or commonly known as Nipple Fruit (I am not joking!). 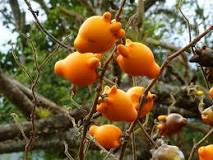 Its Chinese name refers to many generations, which is appropriate for this time of family gatherings.  Instead, opt for luxurious looking, long-lasting orchids or cherry and plum blossoms, poppies, narcissus and of course, orange or kumquat bushes.

I have a penchant for white flowers but there is always something compelling about spring blooms.  My favorites are poppies and narcissus which are believed to aid in the flowering of our hidden talents and as such, they represent prosperity.

You can go dramatic with this Spring Orchid Creation from my talented friend Lowdi Kwan or demure like this orchid in the entryway. 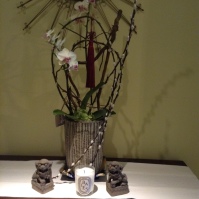 Couplets -Hanging on doors and throughout the house judiciously are vertical pieces of red or light gold paper with auspicious sayings comprised of four characters.  These 春联 (chūnlián) can be purchased or better yet in Hong Kong, our children write them as part of Chinese language class.

Incidentally, I had a bit of a dilemma with the hanging on my front door, a very elegant dark chocolate rosewood carving of 福 (fù).  Surprise, surprise…the somber hue was considered not effective enough in welcoming in the new year!  From a design standpoint, though, there just wasn’t enough contrast as it blended into the mocha color of my door.

So just this morning, I took myself back down to the shop and, lo and behold, they have run out of the paper cuttings!  Didn’t I say that they were hard to find?  Gritting my teeth, I settled on a more traditional red and gold, felted and quilted cutout.  Then, the orange bushes arrived, a little bigger than I imagined!

Ok, this is verging on gaudy…but you can see my daughter’s couplets

In conclusion, I have only covered three of the main decorations that I used to achieve a festive look, with a light hand (at least inside the apartment).  Lots of little touches that bring the eye in and around the room, but not overwhelming, is the rule of thumb (beside my overwhelmingly festive door). That said, I did give into the child in me and just had to find a place for this adorable stuffed monkey!  Year of the Monkey!

There are also many, many more decorations that you could consider such as the tray of togetherness, 攢盒 (Cuán hé) , which looks like a miniature lazy Susan filled with nuts, candied lotus root, watermelon seeds and other treats.  I did my own version with plates of baked treats and an arrangement of oranges with a p

urchased couplet for decoration.  This doubles as a little centerpiece, although my guests managed to eat the entire arrangement of Japanese mandarins!

As with my earlier holiday decorating advice, be playful and true to your style.   Wishing you a good CNY!  恭喜發財 (Gōngxǐ fācái)!